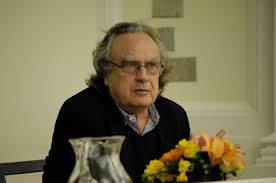 As a historian, and although he denies it, also as an art critic, Benjamin H.D. Buchloh, Modern Art History professor at Harvard University (Cambridge, MA), suggests a new way of writing art history based on the revision of classical formalism, but also on the sociology of canonical art. His writings published in Essays historiques 1 and 2 (1992), Postmoderneoavanguarde (1993) and Neo Avantgarde and Culture Industry (2000) reveal a theorist interested in the creative activity of different artists: Michael Asher, Marcel Broodthaers, James Coleman, Dan Graham, Hans Haacke, Gerhard Richter, Martha Rosler, Thomas Struth, Andy Warhol and Lawrence Weiner, and concerned with methodology issues, mainly on how to integrate the historical, social, political and economic context in the analysis of the artistic object. What he is ultimately claiming is the political dimensions of subjectivity or, in other words, the public aspect of art.