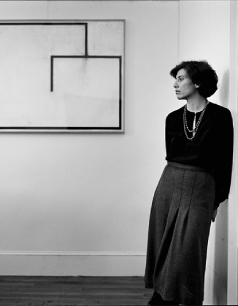 Currently, Rosalind Krauss is Meyer Schapiro Professor of Modern Art and Theory at Columbia University in New York. Her long career as a teacher, which began in the early nineteen seventies at Hunter College of New York giving rise to an illustrious group of disciples, has developed alongside an intense and constant bibliographical production. Her independent and critical opinions first read in Arforum, are consolidated in the pages of October journal (founded by herself), and in numerous publications that comprehensively interrogate the methodological problems and the definition of modernity until, recently, reaching the field of postmodernity. Among these works, the following titles have been translated into Spanish: The Originality of the Avant-Garde and Other Modernist Myths, The Optical Unconscious, The Picasso Papers and Le Photographique: pour une Théorie des Écarts. She has further carried out important studies of historical synthesis such as the analysis of 20th Century sculpture depicted in her book Passages in Modern Sculpture where one can trace her detachment from the formalist thought. We held an intense conversation with Rosalind Krauss at her office in Columbia University, being contemporary theoretic study and art history the main subjects of our dialogue.