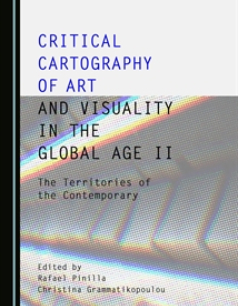 Overview of Global Territorialities: From Empire to Anti-Globalization

Rafael Pinilla and Christina Grammatikopoulou (eds.), Critical Cartography of Art and Visuality in the Global Age II The territories of the Contemporary Cambridge Scolars Publishing, Newcastle upon Tyne, UK (pp-3-21), 2018

Book Description This volume addresses questions that are crucial to approaching art, visuality, and cultural policies from the perspective of global transformations and the rise of new social, political and cultural paradigms. The concept of territory is the theoretical underpinning of three sections of the volume: “The Geoasthetic Hypothesis: Constructing and Deconstructing Territories”; “Creativity and Dissent: The Future as a Contested Territory”; and “Value, Labour and Gender: Spaces of (Un)Recognition”. Obviously, in this case, territory is not viewed as a two-dimensional space that can be abstracted into a map; it rather emerges as a multidimensional place of proximity and difference, of consensus and conflict, of hegemonies and dissent. It expands from the private space of domestic labour to the public field of politics; rather than treating them as separate fields, they are viewed as a complex continuum, where the narratives of displacement, dissent and utopia are being interwoven. In order to understand its multiple dimensions and problematics (cultural, political, social), the volume adopts an approach that extends beyond art theory and aesthetics, into the realm of economics, geography and political theory.

Link:
Back to Home